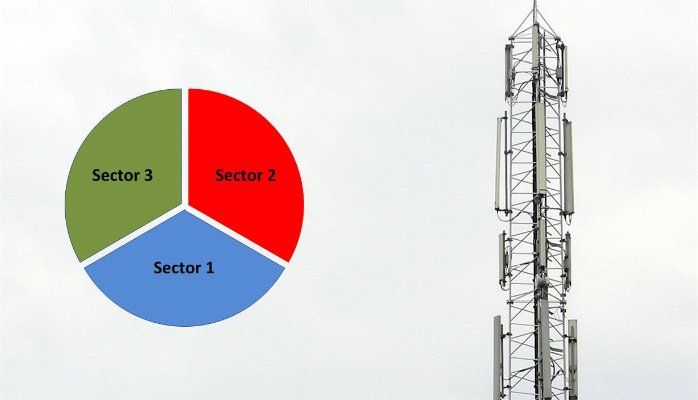 Sectorization is an approach to designing wireless network basestations with multiple directional antennas that combine to cover the 360° of the arc rather than use just one omnidirectional antenna.  With sectorization, we divide the 360° normally covered by the base station into several smaller sections.  This divide and conquer approach provides greater capacity for the number of nodes supported per base station and greater reach per sector as the gain is increased with narrower bandwidth antennas.  It can also be a useful method to mitigate interference from external sources and self interference from other network base stations sharing the same spectrum.

With sectorization, we divide the coverage into some number of pieces. Think of it like cutting slices of a pie. We can cut it into two slices, three slices, four slices, etc.  Each slice is equal to the next slice in size.  The number of slices is equal to the number of antennas and radios used and the number of discrete point-to-multipoint radio links supported.  It is a valid option commonly used in designing cellular telephone 2G, 3G, 4G, and 5G networks and is a strategy that Utilities adopt to enhance AMI (Advanced Metering Infrastructure) coverage performance for their wireless networks.  Three sectors per base station is the most popular design used in AMI today.

As the beamwidth of each sector is an important factor of the design, it is essential to select beamwidths that work well together.  On the surface, you might simply think to divide a 360° pattern by three sectors as using three 120° antennas (3 x 120 = 360).  However, antenna patterns are not precise, so sloppy overlaps would result.  These overlaps can cause self-interference and cancel out signals, so it is smarter to choose three 90° antennas for the desired 360° coverage.  Yes, there will be small gaps and nulls, but generally the reduced interference will make for better coverage and the narrower beamwidths will drive better range performance.

With narrower beamwidth antennas comes greater gain and therefore the need for reduced active power in the amplifier stage of the link.  This results in lower loads to provide power to the radios, smaller UPS and generators and equal, if not greater range for the coverage.

With a non-overlapping array of antennas, there will be small nulls in the coverage.  These nulls can be used effectively to mitigate interference if they are aligned to the undesired carrier direction.  It may be a small advantage, but mechanical orientation of the antennas is a sectoral design is a useful tool when modelling coverage in a challenging environment.

The height of the antennas over grade (ground) has become a key learning in recent smart grid designs.  In rural and remote areas, higher antennas has distinct advantages.  Antennas mounted at 300 feet / 91.45 metres or 400 feet / 131.98 metres is often acceptable.  But, in dense urban and suburban areas, positioning the antennas too high can cause more interference problems.  Urban and suburban areas need the antenna array mounted between 100 feet / 30.5 metres to 150 feet / 45.7 metres above grade.

Range is a critical factor of all AMI backhaul networks.  In urban and suburban areas, expect designs that provide 3 to 5 km of coverage.  In rural and remote areas, 15 to 20 km coverage is often seen.  Terrain or topographic features as well as morphology dramatically affect coverage.  In the coverage plot provided above, the white areas (no colour) indicates no coverage as the terrain creates shadows.  These uncovered areas will need to be serviced from another base station or with a micro-cell model.

Subscribe today and get Metercor’s latest updates straight to your inbox!